Mission Accomplished, and it feels so good!


November’s 5K was the Parkville Turkey Trail Trot. When I signed up I posted it on my FaceBook page. Almost immediately my sister in law, Joanna messaged me to sign her up for the corresponding 2 mile walk. About a week later my Mother, Sheila asked to be signed up, and then my father Ernie did too. My parents were coming to Kansas City from North Miami Beach, Florida to spend Thanksgiving with me, and Joanna was to drive in from Mitchell, South Dakota, as long as the weather held out. It was fun to know they wanted to not only support me in my fitness goals, but to participate with me also, which was so special.

They were there as I passed the starting line, because the walkers would begin about 10 minutes after the runners. What a treat it was for them to also be at the finish line to cheer as I crossed that one as well, because they had finished their two miles just a few minutes before I completed my fasted 5K of the year! 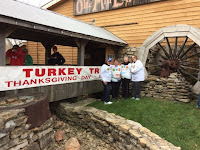 My dad is 87, and he said he still had plenty of steam and could have walked the full 5K…he and my mom were troopers, because while they walk daily in south Florida, they don’t have to contend with doing it when the temperature is in the upper 30’s! Perspective is everything though, because it was comfortably mild to Joanna compared to the winter weather in SD.

December brought me to my last 5K of 2016, the Christmas Light 5K in NKC, and it was thankfully correctly advertised as “pancake flat”. I love a flat course, this one did not disappoint, and it wound through north Kansas City as we got to run in the dark through neighborhoods with lovely holiday lighting and families outside cheering us on.

Santa was on hand for pre-race pictures, so of course I had to get a picture with his Jollyness and my biggest cheerleader, the Husband.

I had extra cheers at the finish line this time, as the coolest 9 year old I know, Ninja Robert, and his parents came out to celebrate the completion of my year-long fitness goal. The four of them braved the cold (it was just 35 degrees, brrrrrrr!) to bear witness to my journey and acknowledge my hard work.

Mission accomplished!
My 2016 fitness goal was to complete one 5K race per month. Starting out in January, I thought it would be great if by December I was able to jog the whole way without stopping. Well, I crushed that goal right out of the gate, and it only got better from there. Of course, by “crushed” I mean I was going just fast enough in January to not be considered going backwards, but at least I didn’t stop or walk.

I remember the agony 12 months ago, when my mantra throughout the first 5K was a simple “of course I’m gonna finish”. I thought I was going to pass out when I crossed the finish line, but I also clearly remember how strong I felt, and how proud I was that I actually did it. That feeling of strength and accomplishment was just as present when I ended my December race, after repeating the same mantra throughout as I ran in the dark in 35 degrees.
November was my fastest time all year, I shaved 10 minutes and 27 seconds off my time from January!!!

Some things I learned along the way… my friend O’Neal Hampton was right when he said my mind would want to quit way before my body needed to (thanks Unc, wise words that I never forgot); I am stronger than I gave myself credit for; Having a buddy helped me get the fitness journey started, but showing up for myself is just as important, because sometimes you have to go it alone; Setting a goal and proclaiming it to the world is very helpful for accountability; Springing for the expensive gear makes all the difference in how pleasant the experience is; Finishing strong is a daily choice; and having special people at the finish line cheering you on is highly motivational.

What’s next?
Well, over the last few weeks I have convinced myself to train for a 10K in 2017. I feel like this is an attainable goal, and I have targeted the Plaza 10K as The One, primarily because it is later in the year and mostly flat. So…that’s the proclamation, my accountability has been activated…see you at the finish line!

Posted by Unknown at 6:45 PM No comments: