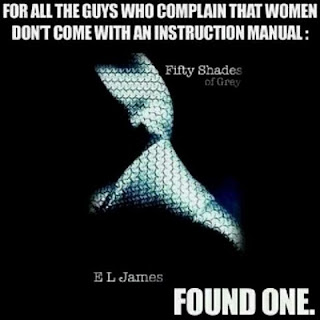 The story of 50 Shades of Grey happens just over the course of a six weeks at the end of the narrator, Anastasia Steele's last year of undergraduate studies and transition into working life, during which she meets and becomes infatuated with the rich and handsome Christian Grey who has some dark secrets. Being a work of erotica, the focus quickly moves to the characters' strong attraction to each other, and the conflict between Anastasia's virginal confusion about her relationship needs and Christan's insistence on a strict Dominant/Submissive sexual relationship with her because it is the only way he is able to handle a relationship due to his childhood trauma (and honest enjoyment of the lifestyle). Needless to say, she is not a virgin for long and the two enjoy many sexual adventures throughout their romance.

To break down all of the conflicting reviews of the first book in the trilogy, which brings the BDSM lifestyle into the mainstream, student therapist intern & blogger Dhyana Coil sat down with Certified Sex Therapist Lisa Meyers to discuss our reactions:
Dhyana: So tell me your overall impressions of 50 Shades of Grey.
Lisa: I read them because I knew clients would be asking questions and I wanted to be able to have an informed opinion. I enjoyed all of the books immensely and got swept away in the fantasy. I think that Christian and Anastasia can be sexually empowering role models.
DC: Wow, I have to say that I struggled more to get into it and agreed with a lot of the criticism about the writing quality. What about them did you find sexually empowering?
LM: Well it’s true that the books are not the highest quality of writing, not your highbrow erotica. First of all I think anything that brings sexuality into the forefront is good, that it got people talking about these things that they couldn’t before. I love the way that it normalized sexuality, especially things like period sex, anal sex and tasting your own fluids.
DC: I couldn’t help but notice a lot of parallels between Christian Grey and Edward from Twilight: they both have incredibly mature personalities in sexy, young, auburn-haired bodies, they are both incredibly attentive and protective boyfriends, they both happen to be rich and powerful. Do you have any thoughts on these parallels between the two most popular objects of female desire lately?
LM: The author, E.L. James has always been very candid about the fact that the books are fan fiction loosely based on the Twilight series. They are also both located in the Pacific Northwest.
DC: Ah well that explains it! We actually received a couple of advice questions that are either explicitly about the book or about dominance and submission in general. The first one is:


Is it possible to have multiple orgasms EVERY single time? And how common is it to climax together as a couple? Because if everything Ana experienced was true then I have really been missing out!
-girl needing more multiple orgasm nights

LM: People need to remember that this was a fantasy. When couples climax together it is typically due to coincidence or luck. However, just as with having multiple orgasms, you can definitely work on it as a couple and learn to communicate and notice the physical cues to help that happen more often. But no, it was a fantasy and I wouldn’t tell anyone to expect either of those to happen every time in real life.
DC: I also noticed a lot of Ana being able to orgasm “on demand,” whenever Christian said that he wanted her to. What do you think of that phenomenon in light of using them as role models?
LM: I think it is evidence of their power dynamic. In this fantasy Christian has been trained as an expert lover, so at this point in his experience he is able to pick up on her physical cues when she is aroused enough to be ready. Since the whole story takes place in just the first six weeks of their romance, they are still in the “limerence” phase, that obsessive infatuation, where you really can just be that excited by your partner all of the time. The hormones of that phase don’t last for people in real life, but it makes sense to me that she could be so into him at this point that hearing him say that he desires her to climax would send her over the edge. Keep in mind, he knew her body response well enough to know when to state the request. It wasn’t random!
DC: Ok, we had another question that relates to the themes in “50 Shades”:


How can you reconcile being a feminist and enjoying being dominated/submission stuff? Or can you? Is there a line that a good feminist should draw?


“What I think you fail to realize is that in Dom/sub relationships it is the sub who has all the power. That’s you. I’ll repeat this – you are the one with all the power. Not I. In the boathouse you said no. I can’t touch you if you say no – that’s why we have an agreement – what you will and won’t do. If we try things and you don’t like them, we can revise the agreement. It’s up to you – not me.” (James, 2011, p.400)

New Sex Therapy Advice! Q&A on the Perserverance of Sperm

Happy Tuesday readers! Today is an exciting day for the On The Couch blog, as we are unveiling our new format. Taking inspiration from the famous radio show Loveline and our favorite advice columns, we are now adding in a Question & Answer series to alternate with our regular topics of interest. Every two weeks on Tuesday you'll now get either the fresh Question of the Month from a reader about whatever current sex or relationship quandary we can help with, or our usual coverage of whatever is on the cutting edge of the Sex Therapy world.

While we look forward to exploring the taboo worlds of bondage and fantasy with you next time, this week we received a question about a topic also important to Mr. Christian Grey - safe sex and pregnancy.


What's the deal with sex on your period? Can you actually get pregnant? Should you do anything differently?      - Trying to keep the parenthood planned

This is an important and complicated question, Trying. While it is often believed that there is no risk of pregnancy during a woman's period, it could in fact be a possibility depending on the timing of your cycle. As this chart below illustrates,

on an average cycle, the fertile days of ovulation are typically about 7 days after the end of the period. However, not everyone has an average cycle every time, and sometimes ovulation can occur as few as 5 days after the period, explained under "Tracking Ovulation" section of this article by the American Pregnancy Association (with the first day of the period marked as the beginning of the cycle.) This would seem to still leave us pretty safe, but the tricky part comes in when we also learn that sperm can stay alive inside the uterus and cervix for up to five days. So, theoretically one could have unprotected sex on day five of their cycle at the end of the bleeding, and the sperm could stay alive for five days, and if the woman also ovulates a bit early that month on day ten, there would still be some persistent sperm ready and waiting for that new egg when it comes along, creating a risk for pregnancy. This seems rare and unlikely, but we all know that person who miraculously got pregnant under the most seemingly safe of circumstances. We recommend that you get in touch with the signals of your cycle through some research on Natural Family Planning to help understand these important details more.Then discuss with your partner what is the safest contraceptive plan based on both of your current levels of commitment to accurately tracking the phases of your cycle, perhaps a combination of understanding the safe times of the month and one of the other methods listed on contracept.org. Happy enlightened and empowered lovemaking!