We Caught the Running Bug!


Dr. Lisa invested in better footwear before February’s Mardi Gras 5K because after the Groundhog Run in January she had a blister that didn’t heal for a week! She now tells everyone who will listen about the benefits of proper fitness enthusiast gear, especially running shoes. At the urging of Dr. Turner, she went to Garry Gribble’s and got an assessment and recommendation for better sneakers. She found out that she need a neutral shoe to better support her foot shape and stride.Boy did it make all the difference! Not only was there no blister the past four races, but she no longer has to wait a day or two between runs.

TPG’s running duo had high expectations for the TropiColor Run, but the morning of the race Dr. Turner was pulled away to provide family support in a crisis, so Dr. Lisa represented TPG at the Color Run, our fifth 5K for 2016

This was a great opportunity for Dr. Lisa to see if she had what it takes to go it alone. The solo run was cathartic, and she achieved a personal record, as her race time was 41 minutes. 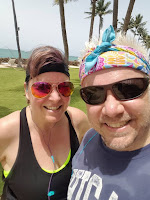 The good doctors make time to train in between 5K’s and they had the opportunity to continue this practice while in Puerto Rico recently for the annual AASECT conference. There were no beach-side trails; however, there was a lovely lagoon nearby that made daily runs enjoyable despite the heat and extreme humidity.
Posted by Unknown at 6:30 AM No comments: