Well, this month's theme is "Don't Give Up!"

September got away from me, and I forgot about the 5K I had planned for the last Sunday of the month. When I searched for a replacement run I was luck to find one on September 32nd...also known as October 1st, :-) WHEW, I snuck it in at the last minute!

I ran a PR (personal record) at the Harley Davidson Scarecrow Run, with a race time of 36 minutes and 56 seconds. I was also 4th in my age group! I was particularly pleased with these results because on race day, minutes before the start, I realized that my I-Pod battery was dead and I would be running alone and without music. Despite these obstacles and several big hills, I finished the race strong!


Two weeks later the real October 5K was an evening run, on October 13th. This was also my 10 year wedding anniversary, and I was happy to celebrate with fitness. It was a beautiful Fall day, and I had the pleasure of watching the sun set as I went West and the moon in the sky when I turned back East. The Great Pumpkin Run was held at Berkely Riverfront Park, and I knew it would be a mostly flat course, which is my personal favorite.

The obstacle with this race was my own thoughts and emotions. I was really annoyed and frustrated with the traffic and parking difficulties, and was in a bad mood by the time I got parked after taking 30 minutes to go a quarter mile. I wrestled with thoughts of turning around and just leaving, but at the same time being excited about my tenth 5K for 2016. Fitness enthusiasm won, and even though I was late I decided to stick it out and run my race. 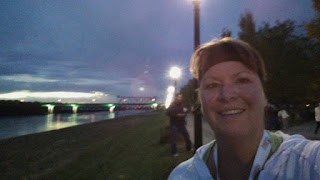 I was not expecting to beat my time was two weeks ago, given the level of frustration I was starting with. My mind was focused on just finishing without stopping. I had my music ready and shifted my thoughts to visualizing crossing the finish line.

I felt so accomplished after this race, and could not wait for the results, because I felt pretty sure I ran my fastest time to date. When the results posted I was proud of myself for not giving in to frustration and I was reminded of the power of positive thinking. I hit another PR, with a race time of 36 minutes and 18 seconds! That's a far cry from my time way back in January when I completed the Groundhog Run at 48 minutes and 57 seconds...proof that great things happen when you honor your fitness goals by showing up consistently and following through. Every. Single. Time. #10down2togo