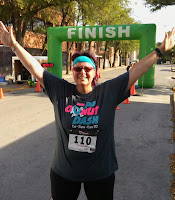 We are eight months into our year-long challenge of completing one 5K per month in 2016. It has been a wonderful adventure in dedication and self challenge. June brought the good doctors to the Donut Dash in North Kansas City, with a wonderfully urban flat course. 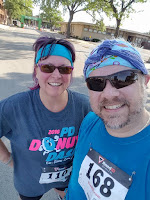 July's 5K was Rock the Crossroads, and it was a ridiculously hot night run. But the t-shirt and medal were too cool for Dr. Meyers to pass up, so she strapped on the camel back and when Dr. Turner took a pass, she recruited her husband, Jerry, to fill in. He was a trooper in the heat, and it was exciting for him to complete his first 5K.

A friend suggested the 5K for August, Head for the Cure, located at Corporate Woods. This was by far the largest 5K TPG participated in so far this year. There were thousands of people in attendance, and the atmosphere was like a huge party.

We are planning to participate in the 13th Annual Smithville Dam 5K Run/Walk and the Great Pumpkin Run for our next two races. Think about joining us in September or October for fun and fitness!

Posted by Unknown at 1:45 PM No comments: